Discuss films here. There is also a sub-forum to discuss specific aspects of DVD and Blu-ray releases of films, but all discussion of film plot points and casting should be kept in the main forum.

Some people (notably Kermode) have been saying simultaneous home releases are inevitable for some time now.
Top

The vast majority of the cinema money a movie makes is in the opening 2-4 weeks.* If films are released simultaneously worldwide, then a month later move to streaming services it shouldn't hurt box office too much.


*While there are exceptions to this, such as indie movies which build on word of mouth, they are generally lower budget and thus not as impacted by piracy concerns.
Top

statto wrote:The vast majority of the cinema money a movie makes is in the opening 2-4 weeks.* If films are released simultaneously worldwide, then a month later move to streaming services it shouldn't hurt box office too much.


*While there are exceptions to this, such as indie movies which build on word of mouth, they are generally lower budget and thus not as impacted by piracy concerns.

I'd agree, but it's a tricky equation.. Your 'End Game' tent poles will always get a lot of bums on seats and having a very short window wouldn't impact them too much. However it's the large middle ground of releases, like Villeneuve's previous pictures, where your uncertain and busy punter.. might give it a pass because they've never heard of it and it'll be streaming in a couple weeks. We are already at a point where, only one film can be released each weekend, due to overlap and profit dips short theatrical windows would make this a lot that worse.

I don't think any other studios have gone all in to follow AT&T... Disney did not announce any major changes to their plans in their investor day. They have a lot of Disney+ content in the works, but it's specifically additional to their theatrical plans. There were a couple films which they've moved to +, including a live action Pinocchio, but that could just as well have been because Mulan was badly received. Also they have a large backlog of releases to fit into a limited number of weekends.. they've not changed anything Marvel which was planned to be theatrical.

Disney have been doing VERY well the last few years with Marvel, Pixar, Animation and Star Wars, it would be mad for them to change that right as they've acquired all the Fox IP. They've got some extremely expensive Avatar pictures and an increasing number of Marvel properties collecting dust. If they do anything drastic they'll do better to buy up a theatre chain if any start to properly fold. AMC is apparently on it's last legs. Even Universal have been suspiciously silent, they've been trying to kill theatrical exclusivity for years but I think they've been burnt by the low sales of the streaming options.

There is a lot of talk of whether people will be afraid to go out and the cinemas will start to die off... time will tell.. but I don't think so, people are itching to go out! They can't be kept in. If in April-ish there is a "It's pretty much all clear... but please wash your bloody hands next time". People will be out in their droves. A tent pole picture 3-4 weeks later, in mid May.. people will be out in droves.
Top

There is plenty of space for 12months of tentpole films to be reallocated further down the line, to suggest that studios can only release one film per weekend is silly talk. Yes it would hurt them to release Dune and Matrix 4 at the same time, but they'd still generate more money in the first week or two than a HBOMax debut AND there's be no piracy to worry about! I've been averaging 120+ films at the cinema for the last couple of years, tentpoles mostly get released in Summer and in the run up to Xmas. There are plenty of weeks in the year when these types of films would only be up against standard releases. Yes it would bury most of these standard releases, but it is entirely doable.

IMO this HBOMax announcement is extremely premature and they should have at least held on for a few more months to see how the vaccine changes the landscape, and I wouldn't be surprised if, in the best-case scenario of a rapid turnaround of the pandemic during 2021 and the reopening of theatres, AT&T decide to drop plans to stream these movies.
Top

So have them bumped up the Dune release date because of this? It was down as being in December 2021, is that still the case?
Top

New trailer. It's over 3 mins long, which these days usually equates to 'entire plot', but doesn't give everything away to the uninitiated. My expectations are sky-high for this, based on Villeneuve's past work. And, of course, no Sting.

Looks as though embed doesn't work, but clicking on the link in the midst of all that nonsense should work.
Top

Still very brown & murky, but they've amped up the action for that trailer & it all looks quite impressive & epic. It does seem to give away the fate of one particular character though.

My main worry about this is no matter how good the film is, we'll only get half the story & the proposed sequel(s) will never get made because it won't (can't?) make enough money in the current climate.
Top

That does look really good. I may be alone in liking both the Lynch version and the SciFi mini-series, but really hope the rest of the story gets told in Villeneuve's version too.
I've got a signature and an avatar but not access to my old account 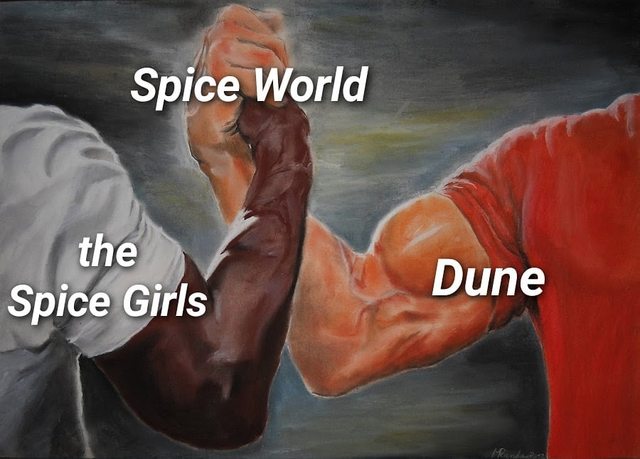 If we don't get Josh Brolin running into battle carrying a pug.....I'm not interested

I may be in the minority that loved the David Lynch version and often find myself quoting it....

The Spicediver version is very much worth a watch

Watched the 3 hour extended TV version, I see this is 3 hours long, is it much different than that? Found the Tv version somewhat lacking still, didnt hold its length well.
Top

I’ve seen the 3hr Reconstructed Workprint but not the TV or Spicediver edits.

The Spicediver edit seems to have good reviews and I think it is also included on a new German Dune 4K set but possibly only in SD.

From what I’ve seen the Spicediver edit is split up into chapters/books?

It's kind of depressing that this tedious shite is the only active thread on the entire site.
Top

Yeah the switch to the new owners and the extended downtime really killed off the place, and that's genuinely taken me by surprise. Just figured the community would return after a month or so for things to settle, but it's not looking like it will.

Mind you the Film and TV sections have been slownly descending into the "Star Wars and Marvel" forums for a while now. Seems nobody really wants to discuss cinema on here anymore outside of those kind of films and when something like Dune emerges that's a revival of an iconic property.
Top

The covid thread was the only really active one for a while, but everyone got fed up with arguing with the same two members and stopped posting in it.
I've got a signature and an avatar but not access to my old account 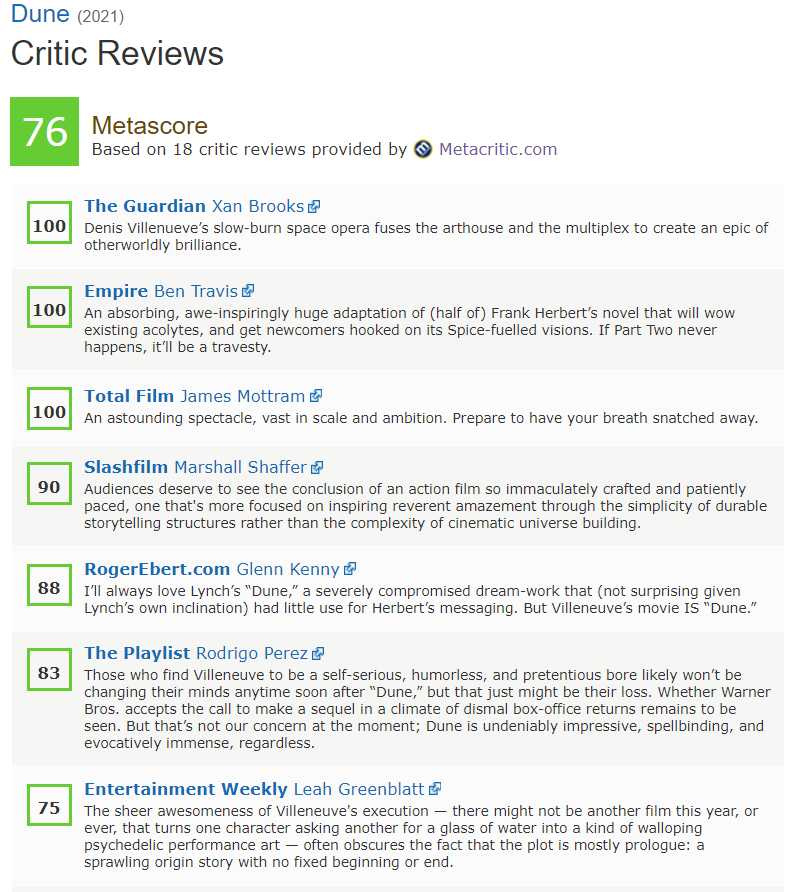 The Guardian concern me calling it a slow burning film, as his last one (which is loved by many) Bald Runner 2049 was a pretty looking slow bore. This has got a lot of story so should hopefully be more like Arrival which was brill.
Top

Sounds like Dune is building up to a more action-packed sequel.
Top

cliff homewood wrote: ↑Tue Sep 07, 2021 3:22 pm The Guardian concern me calling it a slow burning film, as his last one (which is loved by many) Bald Runner 2049 was a pretty looking slow bore. This has got a lot of story so should hopefully be more like Arrival which was brill.

I'm not sure that being a slow burning film would be anything to worry about as Arrival is the dictionary definition of a "slow burner". Films are only boring if you aren't into them, the pacing is largely irrelevant unless it is wildly inconsistent. The most boring film I've ever seen in the cinema is Transformers 2 and that can't be accused of being a slow burner. When I saw Blade Runner 2049 in the cinema, I would have been happy if it went on for another couple of hours.